Completion of year-long restoration marked at ceremony on Friday


The multi-million pound restoration of the 88-year-old Sutton Weaver Swing Bridge is finally complete, hailed as a ‘resounding success’. A flotilla of rowing boats and a fleet of vintage vehicles helped to mark the culmination of the £4.5m project at a special ceremony held on Friday, October 10.


Traffic switched from the temporary bridge back on to the structure, which carries around 20,000 vehicles a day, on Saturday evening.


The deck and pedestrian walkways have been replaced, steelworks repaired and the unique buoyancy structure on which the bridge swings has been extensively refurbished to maintain the bridge's carrying capacity of 40 tonnes and extending its life by more than 50 years. 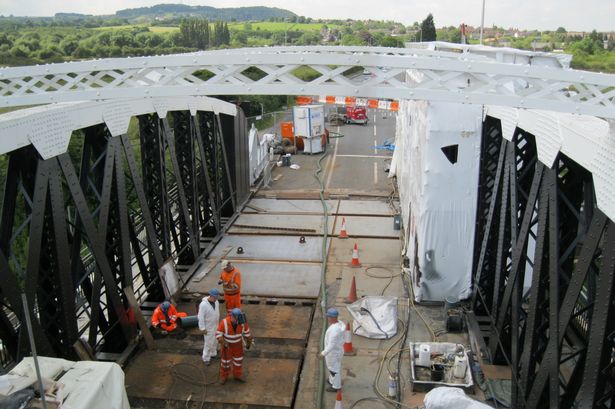 The huge engineering project began in earnest in summer 2013 and is the first complete refurbishment in its history.
The reopening celebration comprised a ceremonial swinging of the bridge, the unveiling of a plaque and a river parade - with boats provided by Runcorn Rowing Club and River Weaver Navigation Society.


A 1930s Leyland Cub lorry, First World War army lorry, classic cars and a modern day HGV - supplied by Huntapac Produce Ltd - crossed the bridge to highlight the vehicle weight changes it has had to contend with since it opened in 1926.


The Department for Transport, Cheshire West and Chester Council and the Canal and River Trust joined forces to fund the scheme.


Weaver Vale MP Graham Evans said he was ‘delighted’ that the three agencies ‘have ensured that transport infrastructure in Weaver Vale is better than ever’.


Executive member for localities Cllr Lynn Riley added: “The whole project has been a resounding success and follows on from a more flexible way of being able to finance major schemes.


“The council and its partners came together to make this happen and the funding contribution received from the Department of Transport Pinch Point Fund has been most welcome.”


The Weaver Navigation is expected to be fully reopen to all river traffic by the end of October.