Huntapac have proudly supplied North West Retailer Booths for over 30 years. William Hunter, Chairman for Huntapac Produce was honoured to be asked by Booths to cut the ribbon at the official opening of their newest store in Hesketh Bank, Lancashire. 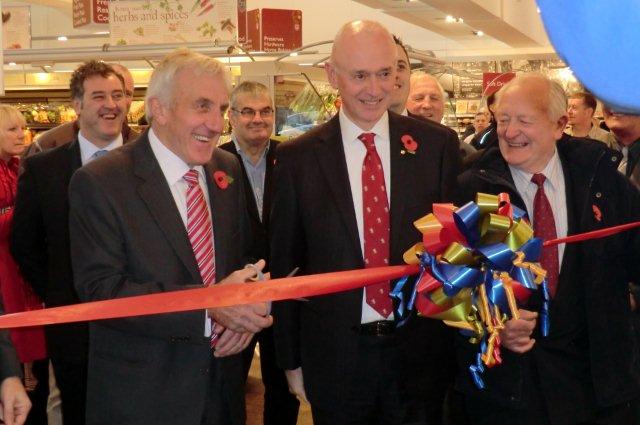 The opening started when Chairman of Booths, Edwin Booth pulled into the car park driving the Booths horse and carriage. He was followed in convoy by three bright red 1930s/40s fruit and vegetable trucks. (A 1943 Austin Vintage Truck, a 1950 Bedford Vintage Truck and a 1936 Leyland Vintage Truck). Each truck in turn dropped off Property Director Graham Booth, Fresh Food Director Simon Booth and Store Manager Matt Welsh at the entrance where they were met by local suppliers. The old trucks were supplied by Huntapac, a long serving supplier of Booths, and were used in the past to deliver fresh produce to stores.

Along with members of the Booth family, two very special producers were on hand to officially open the door. William Hunter of Huntapac and John Molyneux of Molyneux Farms who have both been supplying Booths for over 30 years. William Hunter proudly cut the ribbon to open the new Booths store.